The Soy Bean and Other Hormone Disrupting Foods and Products 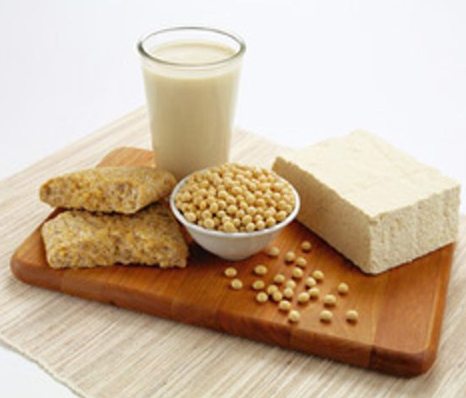 In this day and age it’s easy to become a vegetarian; people are more knowledgeable and the soy industry has created numerous products to enable vegetarians to obtain their daily protein. From the humble soy bean we have soy flour, tempeh, tofu, soy milk, soy sauce, miso, soy cheese, soy burgers, soy mayonnaise, and even soy ice-cream. Now at first this seems like a good thing but for the last 11 years there has been a ground swell of negative publicity on soy and a proliferation of research and new discoveries, so it is worth looking at. I must express here that it seems soy, like many other foods I talk about, has become a victim of when science and technology tries to “improve the food” to get the most out of it financially, we seem to have problems. While I believe soy inherently is a good food when cooked correctly and eaten in moderation, (of course I’m not talking about soy that has been genetically modified), it is what we have done to the humble soy bean that has created the problems we are now seeing.

Soy was traditionally used in Asian countries, but never in generous amounts. It was often used by the less affluent in times of scarcity and then only eaten after a painstaking process (lengthy fermentation) to destroy the toxins. Asians consume soy products in the form of tofu, miso, tempeh, fermented soybeans, boiled soybeans and soy milk (a very woody bland tasting product, not the sweetened, flavoured and chemicalised concoction sold in western grocery stores). The estimated amount of soy protein consumed from these sources is about 7g per day. Asians generally only use small portions of soy to complement their meal around 4% of their total food consumption. It should also be noted that soy is not the main source of dietary protein for Asians. On the other hand, many vegetarians in western society think nothing of consuming 220 grams of tofu and a couple of glasses of soy milk per day, two or three times a week, well in excess of what Asians typically consume.

Soy, which was once a minor crop, was not termed a food but rather an industrial product. It has now become a major food crop, and the last 20 years has seen the proliferation of soy products and by products that dominate the market. A whopping 60% – 80% of foods on grocery shelves now contain soy in the guise of soy flour, textured vegetable protein, partially hydrogenated soy bean oil, soy protein isolate and vegetable oil. Check the labels. Cake mixes, chips, crackers, cookies, margarine, infant formulas, meat substitutes and bread all contain soy in some form. Unbeknown to most of us soy now plays a major role in our diet.

The chief concern is that mostly we are not choosing to eat this amount of soy, it is being imposed upon us, and we face the risk of mega dosing on soy, once again overdosing on a food that is possibly causing more food sensitivities and health problems — the same scenario we have already seen with wheat and dairy. This is not about scare mongering but rather making you aware that this food, which was not in our diet 20 years ago, is now there in increasing amounts. With this knowledge it is possible to make educated choices about the food you consume. Not only is soy in our diet in greater amounts, there are certain dark sides to the soy bean that need to be addressed. Soy contains potent enzyme inhibitors that block the action of trypsin and other protein digesting enzymes. They can produce serious gastric distress with reduced protein digestion causing chronic deficiencies in amino acid uptake. Soy beans also contain haemagglutinin, a clot promoting substance that causes red blood cells to clump together. Together, trypsin inhibitor and haemagglutinin cause growth retardation and thyroid deficiency.

Soy beans are also high in phytic acid, present in the bran or hulls of all grains. Phytic acid can block the uptake of essential minerals such as calcium, magnesium, copper, iron, and especially zinc. The phytates in soy beans are highly resistant to normal phytate-reducing techniques such as long, slow cooking. Zinc malabsorption is a major concern as this is needed for brain and nerve function. Lignin is also present which is another binder of minerals, making them unavailable to the body. The soy bean has one of the highest amounts of lignin compared to any other legume or seed. This binding is so complete that scientists who wish to study the effects of low zinc concentrations in test animals merely add soy bran to the animals’ diet. Zinc deficiency is known to impair the immune system and promote prostate disease. The traditional asian diet always included seaweed, which provides sufficient minerals to overcome the potential deficiency resulting from the effect of soy lignin’s. Compare this to the Australian diet, which is sadly lacking in many important minerals.

Parts of the soy bean which are of particular concern are the endocrine-disrupting isoflavones, also known collectively as xeno or phyto-oestrogens. In 1991 a team of Japanese scientists found that two tablespoons of soy per day for one month resulted in a significant increase in thyroid stimulating hormone. Goitre and hypothyroidism appeared in some of the subjects and many complained of constipation, fatigue and lethargy. Some studies have gone as far as saying that soy may increase the chances of oestrogen-dependent breast cancer. You have to wonder here what these phyto-oestrogens are doing to our children and our men.

The most serious problem with soy may be its use in infant formulas. “The amount of phytooestrogens that are in a day’s worth of soy infant formula equals the amount of oestrogen in 5 birth control pills”, says Dr Mary G Enig, president of the Maryland Nutritionists Association. She and other nutrition experts believe that infant exposure to high amounts of phyto-oestrogens is associated with early puberty in girls and retarded physical maturation in boys. While soy producers try to get rid of the anti-nutrients, in the process they destroy many of the nutrients. Miso, tofu, tempeh and other fermented soy products are by far the superior soy foods. For me the most frightening of soy products is Soy Protein Isolate. This is something you cannot make in your own kitchen. It is made in an industrial factory using alkaline and acid washes, with very high temperatures, high pressure and spray drying for the final product. Nitrites, which are potent carcinogens, are formed during the spray drying, and another toxin is formed during the alkaline processing. Numerous artificial flavourings, particularly MSG, are added to soy protein isolate and TVP (Textured Vegetable Protein) products to mask their natural taste. In some studies, the consumption of soy protein isolate increased requirements for vitamins E, D, K and B12 and created deficiencies in calcium, magnesium, manganese, molybdenum, copper, iron and zinc. Soy Protein Isolate is the key ingredient in many baby formulas and protein powders, protein bars and soy foods that imitate meat and dairy products. Please check your products and avoid thisinsidious ingredient.

Soy, Menopause and Other Endocrine Disruptors

With the degree of scepticism for conventional cures for menopause and the recent research that implicates HRT increasing the risk of breast cancer, there is no wonder women are looking for natural cures. For many years the soybean was touted as the cure all for menopause, due to its phyto-oestrogens, but recent research shows that the phyto-oestrogens have very little effect on vasomotor symptoms such as hot flashes, night sweats and vaginal dryness. The Mayo Clinic research showed no benefits from soy protein isolates which contains very high levels of phytooestrogens.

The hormones in the soy are aromatase inhibitors which lower the levels of oestrogen made by the body, which is counter-productive to controlling menopausal symptoms. What is scary is that soy phyto-oestrogens do have the oestrogenic effect of stimulating the growth of breast cancer cells in tissue cultures. Several studies presented at a recent soy symposium showed that soy protein isolate stimulated the growth of normal breast cells much the same way as natural oestrogen’s do, and with little progesterone present this would add to the breast cancer risk.

In the past 40 years there has been a dramatic rise in female related illnesses. Today we see puberty as young as 3 but averaging at the age of 10, endometriosis effects 10% of premenopausal women, PMS 30%, uterine fibroids 25% and breast cancer 10%. Being a woman in the 21st century is a hazardous occupation. Oestrogen and Progesterone work together and in harmony in both sexes. It is not the absolute deficiency of oestrogen or progesterone but rather the relative dominance of oestrogen and relative deficiency of progesterone that is one of the main causes of health problems when they are off balance. Many women in their mid 30’s, most women during their mid 40’s and essentially all women during their 50’s are overloaded with oestrogen and at the same time suffering from progesterone deficiency because of the severe drop in physiological production during this period. This is termed oestrogen dominance.

Oestrogen dominance is exacerbated by the food we eat, the cosmetics and personal care products we put on our skin and the cleaning products we clean our homes and clothes with. Many manmade chemicals that have been introduced into our daily lives without our knowledge and some foods have oestrogenic properties similar to soy, including but not limited to; pesticides, plastics, industrial waste, some meat, soaps, shampoos, cleaners and cloths detergents. There is an estimated 75 chemicals that deliver powerful oestrogenic effects on the body that we use daily that increases the chances of oestrogen dominance in our lives for both men and women. The key is to reduce these foods and chemicals in our lives in order to decrease the chances of oestrogen dominance. Oestrogen dominance is implicated in many disease states including; early puberty for young girls, late maturation for boys, uterine fibroids, breast cancer, endometriosis, fibrocystic breasts, infertility, PMS and thyroid dysfunction.

We naively believe that the foods, cosmetics, personal care products and cleaning products on our shelves are safe. I strongly urge anyone eating soy products or drinking soy milk to find out what they can about soy and it’s by products. I also urge you to look at the ingredients in everything you use. Choosing ethical companies that have no hidden agenda but to deliver safe food and products to the planet and those that reside here can be advantageous for the health of the individual and the planet.

While I believe a small amount of fermented soy occasionally can be good for our health I believe that we need to be very aware of how much we are eating, especially in light of current research and knowledge. Do some research, find out as much as you can about the products you buy so you can make informed choices about what you eat, put on your skin and use around the house.

← Prev: The Good and Bad on Fat Next: Confessions of a Frustrated Pharmacist →