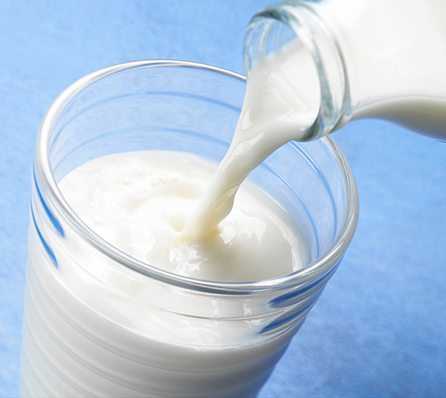 It was first believed that milk drinking began in dairy farming communities in northern Europe. Through a process of natural selection to compensate for vitamin D deficiencies due to a lack of daylight, communities in northern Europe were believed to have undergone a genetic mutation which enabled them to produce the enzyme lactase necessary to digest the milk sugar lactose.

The production of lactase in humans is a characteristic known as lactase persistence. Since adult consumption of fresh milk was only possible after the domestication of animals, it is likely that lactase persistence co-evolved with the cultural practice of dairying, although it was not known when it first arose in Europe or what factors drove its rapid spread. The majority of Europeans produce lactase throughout their life, many adults worldwide do not produce the enzyme lactase.  But with migration and intermarriage of cultures this is changing.

The latest research by scientists from University College London has revealed that this genetic mutation first occurred, in dairy farming communities in central Europe 7,500 years ago, in the region between the central Balkans and central Europe.

According to previous studies, dairying developed in south-eastern Europe soon after the arrival of farming. Milk proteins have been discovered, for example, in present-day Romania and Hungary in ceramic vessels which date back between 7,900 and 7,450 years. Traces of fats have also suggested that dairying began in England some 6,100 years ago. It is believed that Germanic and Celtic people practiced cattle dairying and drank significant amounts of fresh milk, however, it is most likely that milk was first used to make cheese, butter and yoghurt rather than drunk fresh.

Many animals have been used for milking and not that long ago the local dairy milked the animal, put it in bottles and then it was delivered to the front door.  I remember picking up the glass milk bottle with cream on top every morning from my front door step. It was also not that long ago that many households had a house cow or goat.

Things have changed, the house cow is not always practical and it is no longer the local dairy that provides us with milk but rather multi national companies that collect the milk from the farmer, mix all the different herds milks from various dairies into one concoction and then process it by pasteurisation, homogenisation, adding or extracting permeates, calcium, fish oils, flavours, colours and so on.  Millions of litres of milk are being shipped around the country and into supermarket fridge space.

As with anything that becomes too big there is also big waste and by products. One by product that has come to the notice of many Australians of late is the bobby calf. 700,000 week-old bobby calves are discarded yearly as ‘waste products’ of the dairy industry. Most people aren’t aware that in order to produce milk, dairy cows are kept almost continually pregnant. Unwanted calves (known as ‘bobby calves’) are sent to slaughter in their first week of life so that milk can be harvested for human consumption.

I’ve never been one to buy supermarket milk, I always buy local dairy milk that has been pasteurised only or I buy raw milk called cleopatras bath milk (for bathing in of course).  I’m fortunate on the Sunshine Coast we have a number of boutique dairies and recently I asked one of the dairies if I could come and visit and see the ethics of the dairy. Maleny Dairies is nestled in the hills of Maleny, it is a 200 acre farm of rolling hills. The cows were grazing on lush pastures and small calves and goats were frolicking near by.

Kay and Suzie showed me around, Kay is a third generation farmer at Maleny Dairies.  You could see her love and passion for what she was doing.  In 2000 when the deregulation of the dairy industry was passed, many diaries closed their doors.  But Kay and her family decided they could become a boutique dairy.  They opened their doors soon after building the dairy and have distributed milk from Noosa to Brisbane ever since.

I had some tough questions regarding bobby calves, antibiotics and feed.  Kay told me that the bobby calves stayed with their mothers for one week and then were shipped off to market, where they may be killed for food.  At no time were the bobby calves deprived of food or treated by Maleny dairies in a inhumane way.  We should have no elusions that if we drink milk that the loser will be the baby cows unless you have your own cow.  It is a matter of whether you want to be a vegan or drink milk, yogurt, cheese, butter etc.

Kay told me that there was very little mastitis in the heard as they knew how to manage it, so very few antibiotics are being used and if they are used the milk is not added to the stock.  I love the fact that Maleny Dairies has pasteurised only milk, as well as goats milk and a wonderful pure thick cream.

If you do drink milk, do you drink local, ethical milk? If you are not sure call your local dairy and ask them their policy of their bobby calves, antibiotics, feeds and other processes.

If you can’t find an ethical milk then perhaps you may need to go to the many grain and seed milks that are now abundantly available in your health food store, or make your own almond nut milk.

Let’s eat ethically no matter what we eat.  If we choose not to buy from the large companies then they will have to change in order to survive.  I will learn as much as I can on this so that you can make more ethical choices.

Following is an extract from the Real Milk website.  I’ve attached this so that you can become more educated about milk and be able to ask your local dairy some questions that will give you the answers you need in order to make an ethical choice about the milk you buy.

“Many alternative health practitioners accuse milk of causing everything from allergies and asthma, to heart disease and cancer, but when we could buy Real Milk, these diseases were rare. So what is real milk?
The source of most commercial milk is the modern Holstein, bred to produce huge quantities of milk- three times as much as the old-fashioned cow. She needs special feed and antibiotics to keep her well. Her milk contains high levels of growth hormone from her pituitary gland, even when she is spared the indignities of genetically engineered Bovine Growth Hormone (not an Australian practice) to push her to the udder limits of milk production.
Real milk comes from real cows that eat real feed.
Real feed for cows is green grass in Spring, Summer and Fall; green feed, silage, hay and root vegetables in Winter. It is not soy meal, cottonseed meal or other commercial feeds, nor is it bakery waste, chicken manure or citrus peel cake, laced with pesticides. Vital nutrients like vitamins A and D, and the Price Factor (a fat-soluble catalyst that promotes optimum mineral assimilation) are greatest in milk from cows eating green grass, especially rapidly growing green grass. Vitamins A and D are greatly diminished, and the Price Factor disappears, when milk cows are fed commercial feed. Soy meal has the wrong protein profile for the dairy cow, resulting in a short burst of high milk production followed by premature death. Modern milk often comes from dairy cows that are kept in confinement their entire lives and never see green grass!
Real milk is not pasteurised.
Pasteurisation destroys enzymes, diminishes vitamin content, denatures fragile milk proteins, destroys vitamin B12, and vitamin B6, kills beneficial bacteria, promotes pathogens and is associated with allergies, increased tooth decay, colic in infants, growth problems in children, osteoporosis, arthritis and ..you guessed it.. heart disease and cancer. Calves fed pasteurized milk die before maturity.  (Raw milk is not available in Australia for consumption but it can be purchased for bathing in)
Raw milk sours naturally but pasteurized milk turns putrid and processors must remove slime and pus from pasteurised milk by a process of centrifugal clarification. Inspection of dairy herds for disease is not required for pasteurised milk.
The practice of heating milk to kill germs was instituted in the 1920s to combat TB, infant diarrhea, undulant fever and other diseases caused by poor animal nutrition and dirty production methods. But times have changed and modern stainless steel tanks, milking machines, refrigerated trucks and inspection methods make pasteurisation absolutely unnecessary for public protection. (And pasteurization does not always kill the bacteria for Johne’s disease, with which most modern cows are infected. The Johne’s bacteria is suspected of causing Crohn’s disease in humans.) Clean raw milk from certified healthy cows is your right.
Real milk is not homogenised.
Homogenisation is a process that breaks down butterfat globules so they do not rise to the top. Homogenised milk has been linked to heart disease.  (read more about this process in Changing Habits Changing Lives).
Real milk contains butterfat and lots of it.
Average butterfat content from old-fashioned cows at the turn of the century was over 4% (or more than 50% of calories). Today butterfat comprises less than 3% (or less than 35% of calories). Worse, consumers has been duped into believing that low-fat and skim milk products are good for them. Only by marketing low-fat and skim milk as a health food can the modern dairy industry get rid of its excess poor-quality, low-fat milk from modern high-production herds. Ask any dairy farmer older than 60 what they did with the left over skim milk when they extracted the cream. They will tell you, they fed it to the pigs to fatten them up.
Butterfat contains vitamins A and D needed for assimilation of calcium and protein in the water fraction of the milk. Without them protein and calcium are more difficult to utilize and possibly toxic. Butterfat is rich in short and medium chain fatty acids which protect against disease and stimulate the immune system. It contains glyco-spingolipids which prevent intestinal distress and conjugated linoleic acid which has strong anticancer properties.
Real milk products contain no additives.
Powdered skim milk, a source of dangerous oxidized cholesterol and neurotoxic amino acids, is added to 1% and 2% milk (read your ingredients on the back of your milk container). Low-fat yogurts and sour creams contain mucopolysaccharide slime to give them body. Pale butter from hay-fed cows contains colorings to make it look like vitamin-rich butter from grass-fed cows. Bioengineered enzymes are used in large-scale cheese production. Many mass produced cheeses contain additives and colorings and imitation cheese products contain vegetable oils.”